Seven Georgian citizens have been detained near the occupied Tskhinvali (South Ossetia) region for “illegally crossing the border” in 17th of Aug, 2019. All of them are the locals of the village of Akhalubani, Gori Municipality. They were reportedly visiting a church, which is located near the occupation line. 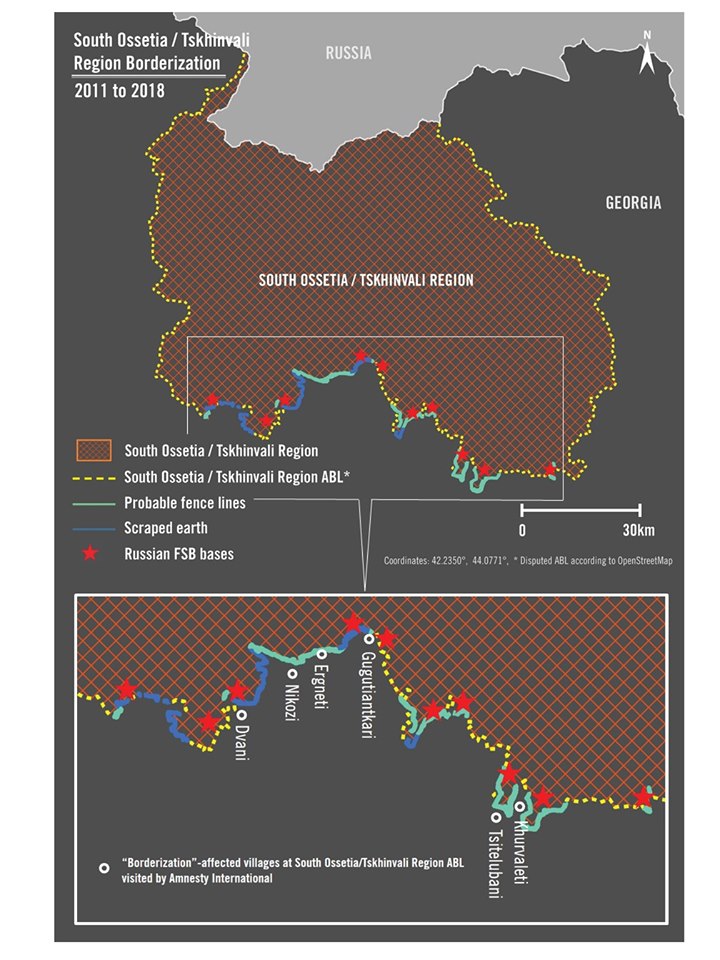 Yet another Georgian citizen has been detained near the village of Akhalubani, in Gori Municipality, close to occupied Tskhinvali (South Ossetia) region for “illegally crossing the border” in 18th of Aug, 2019. Ioseb Dvalishvili, who is the local of the village of Mejvriskhevi, was reportedly taken to Tskhinvali jail together with the other seven people who were detained late yesterday.

The European Union Monitoring mission (EUMM) told that via the mission-managed hotline, the de facto authorities of Tskhinvali (South Ossetia) region have confirmed the detention of eight people on the evening of August 17 and morning of August 18 near the village of Akhalubani, in Gori Municipality.

Restriction of freedom of movement of any kind is cause for concern. At this time it is important to avoid any actions that could further increase tensions. EUMM encourages a humanitarian approach and the swift release of the detainees”, the EUMM said. 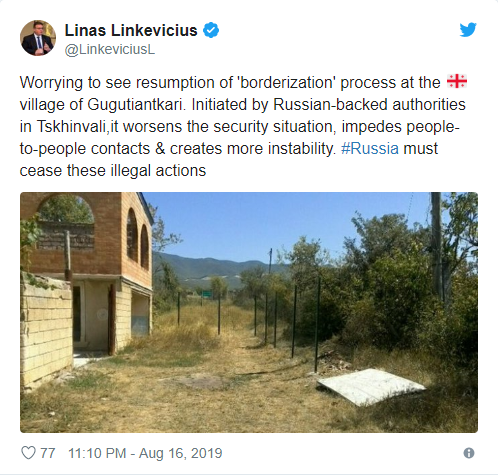 The kidnappings were preceded by a resumption of so called “Borderization”. On August 7, Russian troops resumed the process “borderisation” between the Tbilisi-controlled village of Gugutiantkari and the village of Bisevi controlled by Tskhinvali. They install metal poles here and pull barbed wire.

On August 15, it became known that as a result of all this, the houses of two Georgian families – Gugutishvili and Razmadze – ended up on territory controlled by Tskhinvali.

Houses were badly damaged – they were almost burnt – during the war in August 2008, and no one lived there. However, the owners did not abandon the houses inherited from their ancestors in the hope of someday repairing them, they looked after the yards, and they cultivated fruits on the land and sold them little by little. In just three days they will no longer have this land – they have been given three days to harvest.

Now the members of these two families are dismantling houses – they are taking out bricks on a wheelbarrow in order to build something in another place.

Foreign Ministry calls on int’l community to take measures against illegal activities of occupation forces in Georgia. The foreign ministry said that considering the existing “tense situation” in Gugutiantkari, another village of Gori Municipality, where the occupation forces have erected artificial barriers, kidnapping and illegal detention of Georgian citizens is “a clear attempt to destabilise the situation in the country”. 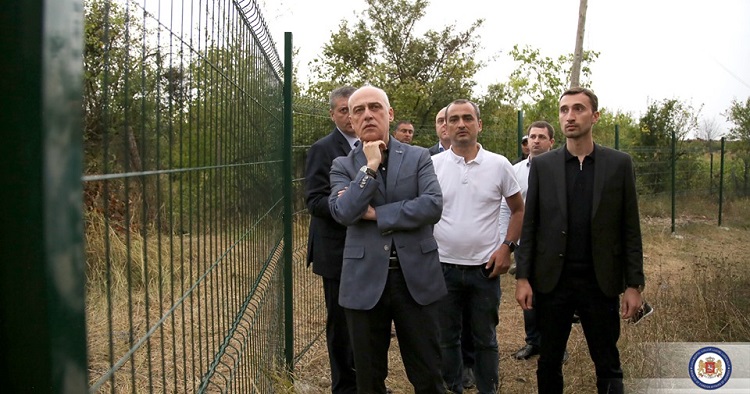 Frequent provocations and incidents on the occupation line further escalate the security environment and the existing grave humanitarian situation in the conflict-affected villages”, the foreign ministry stated. It, therefore, called on the international community to take “effective measures to stop illegal activities of the occupation forces” in Georgia.

The European Union is very much concerned about the so-called borderization activities, - Carlo Natale, Carlo Natale, EU Chargé d´Affaires, told reporters in Gugutiantkari. “In this particular case we see the risk for the local community to have their freedom of movement affected and their life greatly impacted. We are very concerned about this. We are working on all possible avenues, including in Geneva, to address this issue”, the diplomat said.

The Ministry of Foreign Affairs of Poland has released a statement on the so-called borderization process in the Tskhinvali region. “The Polish Ministry of Foreign Affairs is concerned about the Russian-backed resumption of the process of building artificial barriers by the de facto Tskhinvali government in the village of Gugutiantkari, adjacent to the administrative border of South Ossetia/Tskhinvali region of Georgia. 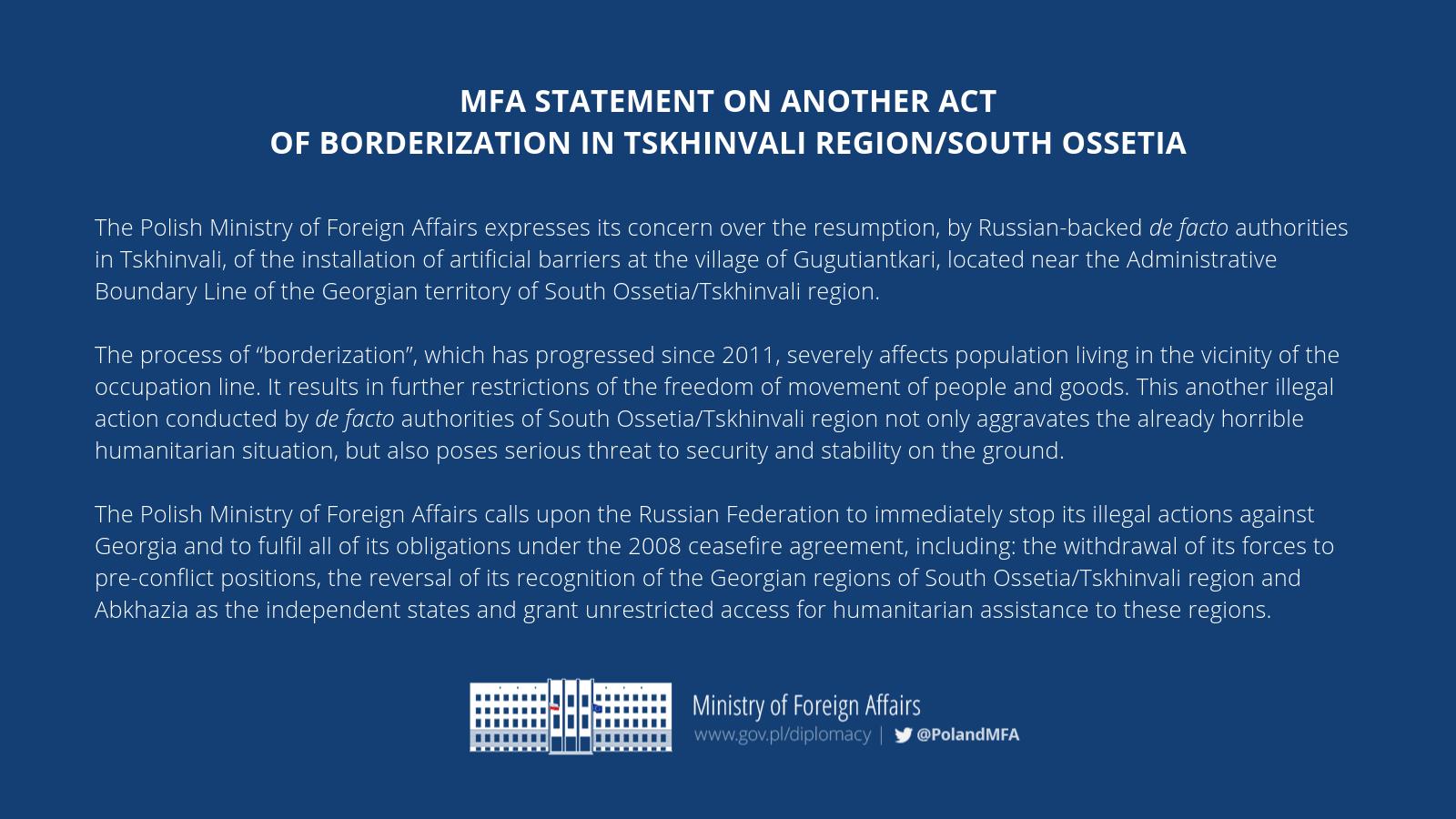